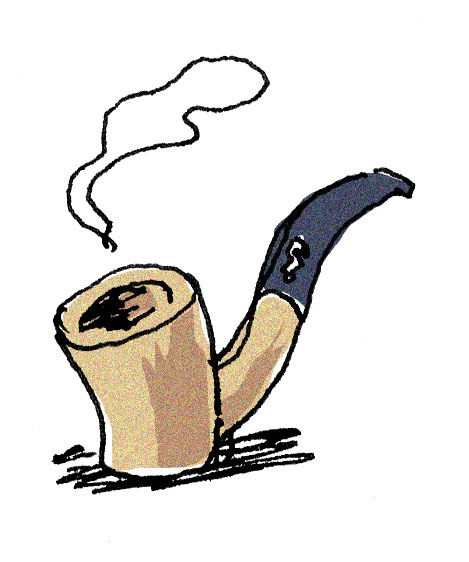 The pipes used for smoking tobacco and other substances can be made from many different materials (the most common are briar, corncob and meerschaum). They all more or less consist of a bowl containing the substance for smoking and a shank ending in a mouthpiece or bit, but can vary widely in appearance – some are beautifully carved. Smoking tobaccos undergo special treatment and blending to produce unique, subtle flavours. The assortment of mixes and flavours is virtually endless. The basic ingredients may be Burley and Virginia tobaccos, with added spice varieties.
Briefly, these blends can be divided into two large families: Aromatic mixtures: generally made from American Burley with added sweeteners and flavourings; “English” mixtures: based on natural Virginia tobaccos, Orientals (Greece, Macedonia, Bulgaria) and Latakia (Syrian or Cypriot fire-cured spice tobacco). Sometimes, many blenders also add a pinch of Perique (a Lousiana “spicy” tobacco).

How pipes are made, and the materials used A pipe’s form and materials are crucial to the smoking experience.

Most modern pipes are made from briar, an excellent pipe wood because of its fire-resistance and ability to absorb water. It comes from the root burl of the Tree Heath (Erica arborea), that grows
around the Mediterranean. Meerschaum Meerschaum (hydrated magnesium silicate) is a mineral that occurs mainly in central Turkey.
Easily carved, it has been in use since the 17th century. Until briar became popular in the 19th century, meerschaum and clay were the most common pipe materials. Since meerschaum is porous, it absorbs substances from the tobacco and old meershaum pipes are a lovely golden brown colour.

The clay used for pipes is almost always very fine and white, although there are poor quality pipes made from ordinary porcelain. The best clay pipes are made by hand by a complicated process and traditionally no glaze is applied. Clay pipes give higher temperatures than other types and are more difficult to use, but experts say that the flavour of the tobacco is purer.

Calabash pipes are made from gourds, usually with bowls made from meerschaum or porcelain inside and are rather expensive. They can be smoked with the hands free so they are popular in films and on the stage Sherlock Holmes is portrayed smoking a calabash pipe.

Corncob pipes are made from maize cobs dried for two years and hollowed to form a bowl, then dipped in plaster and varnished or lacquered on the outside. After this, a wooden shank is fitted.
They are not expensive and really quite good; they also do not need to be &quot;smoked in&quot; before they start to perform well, like briar pipes. Because they do not cost too much, smokers can keep a different corncob pipe for every type of tobacco they smoke, so there is no contamination from different flavours. Popeye smoked a corncob pipe.

Metal pipes can be made from steel, although aluminium and brass are now more common. Tobacco smokers do not like metal pipes because they need a “resination” period, and pipes of this type are more often used for cannabis and other drugs.

Hand-blown glass pipes are popular because the glass does not react with the tobacco so the flavour remains completely pure. They can be quite elaborate and sometimes have a little hole or “choke” in the side that can be covered to allow continuous inhalation and then uncovered to add air; this gives a longer, smoother smoking sensation. Of course, glass pipes have the problem of being fragile.

A Hookah, or nargila, is a water pipe from the Middle East, usually used for tobacco or marijuana, that cools the smoke by filtering it through a water jar; ice and milk or lemon juice can be added to the water. The tobacco used is traditionally sweetened, sometimes with fruit flavours.